Sept. 24 (UPI) — More than 35,000 people have been evacuated from the Indonesian tourist island of Bali amid fears a volcano will erupt for the first time since 1963, when 1,100 people died.

On Friday, the Indonesian Center for Vulcanology of Geological Hazard Mitigation raised Mountain Agung’s alert status to Level 4 — the highest — after a “tremendous increase” in seismic activity.

“Volcanic activity remains high and there are indications of magma rising to the surface and causing tremors,” Sutopo Purwo Nugroho of the National Disaster Management Agency said.

People were ordered to evacuate from a radius of 6 to 8 miles around the mountain. Others left voluntarily.

Gov. Mangku Pastika said another 50,000 people could end up in shelters if the volcano erupts.

They are staying in temporary shelters, sport centers, village halls and with relatives or friends.

Truck driver Wayan Suparta, 35, decided to flee with his family from their home that is 3 miles from the mountain.

He sold the family’s cow because they don’t know when they’ll be able to return.

Many residents are reluctant to evacuate because they are concerned about their livestock.

Healthy cows are selling for half the price — $750 — from before the evacuation.

“That’s why we set up these cattle shelters, to provide displaced people with a place for their cattle, thus, eliminating the need for them to sell their livestock at ridiculously low prices,” Klungkung neighborhood association head Nyoman Suardika said to the Jakarta Post.

As of Saturday afternoon, the free shelter had received 10 cows.

The mountain, which is 45 miles to the northeast of the tourist hotspot of Kuta, is among more than 120 active volcanoes in Indonesia.

In Australia, flights by Virgin Australia, Jetstar and Qanta to Bali are continuing as scheduled to Denpasar International Airport.

Virgin Australia said some flights will be making fuel stops in Darwin, the capital of Australia’s Northern Territory, as a precautionary measure.

“This ensures that if an eruption occurs while the aircraft is en route, we will be able to get guests back to their originating port safely and quickly,” the airline said in a statement. 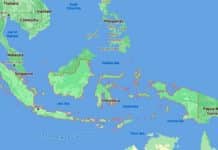 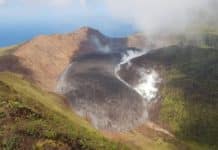