SALT LAKE CITY, Utah, July 28, 2022 (Gephardt Daily) — A woman was transported to a hospital in critical condition Thursday afternoon after she was struck by a Frontrunner train in Salt Lake City.

The accident happened at about 1:45 p.m. at 800 South and 600 West, at a crossing area, said Carl Arky, Utah Transit Authority spokesman.

“She and a male went through the gates we have there that are intended to slow people down and force them to look,” Arky said.

“Apparently, they went out close to the UTA track, and she was apparently was looking across the tracks at another set of tracks on the far side of the road.

“Apparently, she saw that train was about to end, and she stepped out in front of our closer southbound train. For whatever reason, she didn’t hear it and she didn’t see it. She stepped onto the track, and was struck.”

She was rushed to the hospital in critical condition, Arky said. The male who had been with her was not injured, nor was anyone aboard the Frontrunner train.

No age or identity has been released on the woman struck, Arky said, adding it was initially thought she was a juvenile, but later confirmed to be an adult. 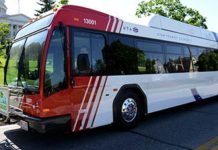