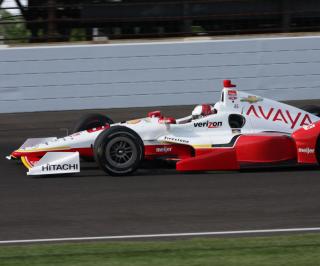 INDIANAPOLIS, May 13 (UPI) — After his red and white car careened like a canvas sail through the wind Wednesday above the Indianapolis Motor Speedway, Helio Castroneves walked away somewhat unfazed.

Castroneves, 40, crashed his No. 3 car in turn one of the Indy 500 practice, a race he has won three times.

“I didn’t expect to go flipping backward,”Castroneves told USA Today. “I was very surprised by that. I was expecting a big shunt and big issues, but it was just like I spun out at any other racetrack.”

After being checked out by safety workers, Castroneves climbed out under his car and was taken to the IU Health Emergency Medical Center in the infield and was later cleared to drive. He then recorded the 15th fastest lap at 226.670 mph.