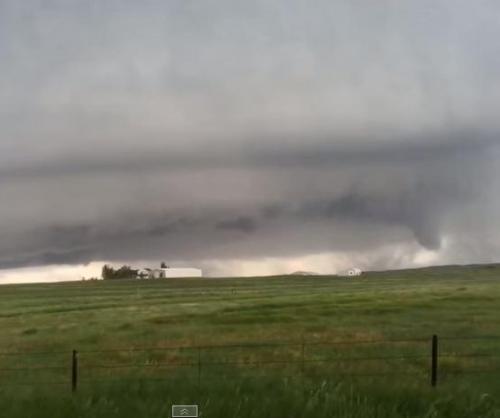 Heavy rain and winds arrived in Boulder and Larimer counties, officials said, causing a twister that touched down just before 7 p.m., local time, between the towns of Longmont and Berthoud, which is located about 50 miles north of Denver.

“We ask all citizens to stay out of the area until the weather passes and we are able to assess the damage to the infrastructure,” Boulder County Sheriff’s Commander Heidi Prentup said in a statement Thursday night, Denver’s ABC 7 reported.

No injuries were immediately reported, but the twister may have damaged at least 25 homes, according to officials. Forecasters said the storm also delivered marble-sized hail. Downed power lines, uprooted trees and flooded streets were also reported, ABC 7’s report said.

The National Weather Service in Boulder said up to four additional inches of rain might fall and bring even larger hail.

The Boulder Daily Camera reported that at least three homes have been destroyed. The Larimer County commissioner reported the same via his Facebook page.

The National Weather Service had issued a tornado warning for the area Thursday evening, and advised residents in the area to take shelter until the storm passed. A flash flood emergency lasting into Friday morning was also issued by the Weather Service.

Some roadways in Boulder County were shut down Thursday night due to flooding and damage, officials said. A Flash Flood warning has been issued for the area, bringing concerns that more damage could occur late Thursday night and into Friday morning, ABC 7 reported.

Authorities said they will have a better assessment of the damage once the storm passes.