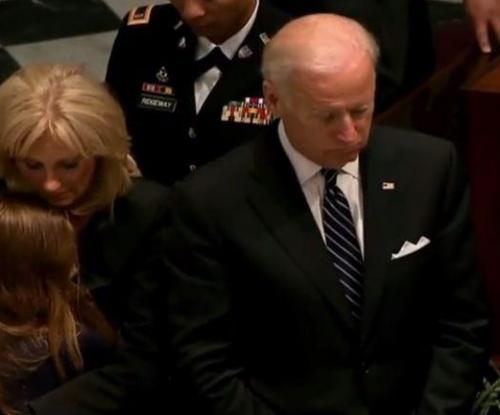 More Than 1,000 Mourners at Memorial Service for Beau Biden

Biden, 46, died Saturday after a two-year battle with brain cancer. His father, U.S. Vice President Joe Biden, has been out of the public eye for days as he grieved his adult son and planned the memorial service, which was held at the Delaware Legislative State House in Dover.

Mourners on Thursday shuffled past a flag-draped coffin containing Beau Biden’s body, and briefly spoke to members of the Biden family.

Delaware Gov. Jack Markell attended Thursday’s service, during which he presented Beau Biden with the Delaware Conspicuous Service Cross — which is given for heroism, meritorious service and outstanding achievement.

“Beau made Delaware a better place for us all,” he said.

A viewing will be held Friday and a public funeral mass is scheduled for Saturday at the St. Anthony of Padua church in Wilmington, Del.

President Barack Obama and the first lady will travel to Delaware for Saturday’s service, where the president will deliver the eulogy.