SAN JOSE, Costa Rica, Aug. 13 (UPI) — A pigeon carrying marijuana and cocaine was apprehended outside a prison in Costa Rica, to the delight of Internet users.

The drug-smuggling “NarcoPigeon,” as named by authorities, was apprehended Tuesday near the La Reforma prison, Costa Rica’s largest, in San Rafael de Alajuela by the country’s Penitentiary Police. The pigeon was allegedly carrying 14 grams of marijuana and 14 grams of cocaine, according to Costa Rica’s Ministry of Justice and Peace.

Officials seized the pigeons’ contraband. It is the first time that the La Reforma prison has seen an attempt to smuggle drugs of this nature.

“At other times, they used cats to smuggle drugs in their tails from area to area, but a situation like this is the first time,” director of the Costa Rica Penitentiary Police Paul Bertozzi said, Clarín reported. “This is another way of operating with which we face; always seeking new ways to smuggle drugs, and we have to be vigilant.”

The bird was “arrested” and then caged. It was later taken to a zoological bird refuge.

“Hundreds of pigeons have manifested in the Plaza de la Cultura to demand the release of NarcoPigeon,” one Twitter user said, posting an image of San Jose’s pigeon-filled Square of Culture. 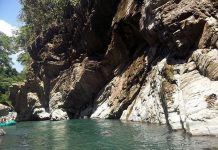 4 American tourists among 5 killed while rafting in Costa Rica