POCATELLO, Idaho, Sept. 11 (UPI) — Authorities in Idaho said multiple crashes resulted from a swarm of bees released from an overturned semi truck on a stretch of interstate.

The Pocatello Police Department and Idaho State Police said the semi truck was transporting thousands of bees Thursday on Interstate 15 when it overturned near Pocatello.

The semi driver was transported to a nearby hospital for treatment. Police said the driver told them he struck a concrete barrier under an overpass while reaching for an item in the cab of the truck.

It was unclear whether injuries resulted from the ensuing crashes.

Lanes of traffic were closed on both sides of the road and Pocatello Police spokeswoman Dianne Brush advised North Pocatello residents to stay indoors and keep their windows closed to avoid confrontations with the bees.

Drone footage from the scene of the semi crash shows thousands of bees forming a dark cloud in the air. 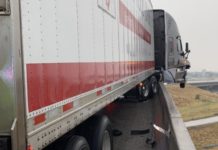 Semi cab dangles from I-215 overpass, third such incident in last two months 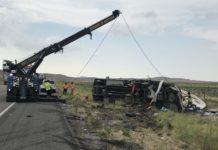 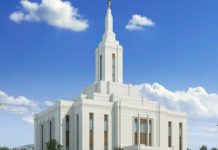