Hudson’s company, formed in 2013, answered back, according to Hollywood Reporter.

The singer complained that she felt as though she were being “conned” by the site, which requires users to fill out a form about themselves so clothes can be custom made to suit their lifestyle.

“Made mistake of going2 Fabletics,” Cher tweeted. What a pain in the [expletive]. won’t even let u see anything Till u give them ur 1st born!! Felt I Was Being Conned.”

Cher told her 3 million Twitter followers she did not consider her visit to the Fabletics site a good one, Business Insider reported.

JustFab, Fabletics’ parent company, requires customers to get a subscriptions it calls VIP memberships before ordering the affordable apparel. Each member is then billed monthly.

Cher is not the first to complain about the web site. BuzzFeed released a report in September that said many of the site’s customers felt duped, even scammed and it was often hard to cancel the membership.

“We love you Cher,” the company tweeted said. The “quiz,” it said, is to personalize the shopping experience. 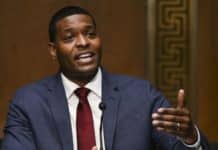