FanX, a pop culture convention, will be held at the Salt Palace Convention Center March 24-26.

For tickets, guest info and other information go to: www.saltlakecomiccon.com 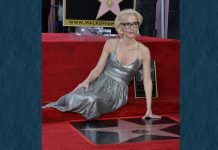