Sept. 28 (UPI) — Lady Gaga and Bradley Cooper‘s first single from the soundtrack of upcoming film A Star Is Born was released Thursday with an accompanying music video.

The song, “Shallow,” features Cooper and Gaga singing as their characters from the film, country-rock star Jackson Maine and waitress-turned-singer Ally.

A music video for “Shallow” was posted Thursday to Lady Gaga’s YouTube channel.

The song was written by Gaga, Mark Ronson, Anthony Rossomando and Andrew Wyatt.

A Star Is Born, which marks Cooper’s first turn as director, is set to open Oct. 5. 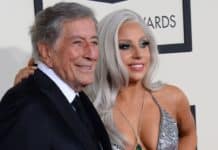