NEW YORK, Aug. 8 (UPI) — Jonah Hill says he is attracting some unexpected admirers by starring in films like the gun-running adventure “War Dogs” and the financial drama “The Wolf of Wall Street.”

“I was at a restaurant this week and two young men that were dressed similar to these guys in their heyday of financial wealth [in ‘War Dogs’] came up to me and said, ‘We’re South African arms dealers and we can’t wait to see your movie.’ They gave me a fist bump,” Hill told UPI at a press conference in New York Sunday.

“I didn’t want to fist bump them. And I’ve had this a lot. Like with ‘Wolf of Wall Street,’ a lot of kind of like, bro-y, stock-market people come up to me all the time and they don’t see that I’m maybe displaying… It’s not full support, you know what I mean?”

Continuing to recall his encounter with the alleged arms dealers, Hill added: “My friends I was with were like, ‘That’s really bizarre and that’s really interesting.’ I tried to ask them more about their business and they immediately deflected… But I would say [making a movie like ‘War Dogs’] changes your world in that way, where maybe if you play somebody in a certain world, people sometimes misinterpret that it is support of that world or that occupation or something.

“So, that’s been interesting and I bet you that will continue to be interesting in my travels. People in a restaurant that you would never know are international arms dealers is kind of interesting. They are right there at the table next to you and you have no idea. You never know what anyone’s up to.”

Co-starring Miles Teller and Bradley Cooper, “War Dogs” is set to open in U.S. theaters Aug. 19. Based on a true story, the film follows two millennials who form a small business and lie their way into a $300 million deal to fulfill a U.S. Military contract to arm the Afghan army. 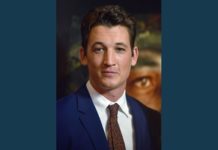