The 37-year-old actress revealed as much in an interview with Close Up with The Hollywood Reporter to air August 2. Gyllenhaal recently filmed sex scenes for BBC Two miniseries “The Honourable Woman,” and said the experience was awkward but rewarding

“Of course it’s uncomfortable to take your clothes off in front of people you don’t know, but it can be an opportunity for really interesting acting,” she said on a panel of fellow actresses for the TV special. “I’m 37, and I’ve had two babies, and I’m kind of like, interested in nudity now.”

“In ‘The Honourable Woman,’ Nessa is such a controlled person … I really wanted the sex to be like, animal,” she shared. “Or you know, like what a woman who’s my age actually really looks like. I am much more turned on when I see shows where people’s bodies look like bodies I recognize.” 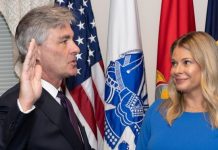 Kenneth Braithwaite sworn in as Secretary of the Navy