CENTERVILLE, Utah, Aug. 19, 2019 (Gephardt Daily) — You wouldn’t think a musical with a song titled “Life is Random and Unfair” could eke out happy endings for so many of its characters.

The child competitors (played by young adults), made it to the county bee by winning top honors in local bees. They are all winners, but each of the twitchy, awkward characters feels like a loser for one reason or another.

William Barfee suffers from a sinus condition and an unfortunate last name. Logainne Schwartzandgrubenierre has a list and feels a crippling amount of pressure inflicted by one of her two gay dads. Marcy Park has staggering intellectual gifts, but no personal life.

Then there’s mousy Olive Ostrovsky, whose parents are emotionally distant when they are not missing altogether; Leaf Coneybear, the spawn of hippie parents, who is easily amused and probably has Attention Deficit Disorder; and Chip Tolentino, a boy scout who is vexed and distracted by the sudden and inconvenient arrival of puberty.

Adult main characters, not including audience recruits, are Rona Lisa Peretti, the bee moderator and a former Putnam County Spelling Bee Champion herself; Vice Principal Douglas Panch, given to inappropriate behavior, and Mitch/Mindy Mahoney, the bee comfort counselor and an ex-con there to perform community service.

With this group, what could go wrong?

The Tony-winning musical comedy — with music and lyrics by William Finn, book by Rachel Sheinkin, and conceived by Rebecca Feldman — draws drama from mini confessionals and humor from the absurdity of the whole situation. Especially funny are the answers the vice principal gives when asked to use words in a sentence. The Monday/Wednesday/Friday cast on stage opening night had to take multiple long pauses for the audience to stop laughing.

The script also gives each character a parting gift: A life lesson that allows them to move forward.

Every actor in the show should be rewarded with a gold star for a strong performance. Director Josh Richardson drew the full humor out of the script, and choreographer Kristi Curtis added dance that is both unexpected and in keeping with the characters’ ages and personalities.

Julie Hilton’s costumes all fit the characters, and she gets an extra gold star for Leaf Coneybear’s inspired getup. The set, by executive producer Scott Van Dyke, sets the scene with humor.

It’s hard to single out an actor in such a talented ensemble cast, but Trevor Hansen (Coneybear), Aaron Linford (Barfee) and Taneesa Wright (Ostrovsky) were especially fun to watch.

For the audience, it’s a relaxing, fun, easy to watch show. It’s got just enough sly humor to keep you on your toes, and plenty of heart to make you care.

The theater says the show would be considered PG-13 were it a film. For more information on the venue, at 525 N. 400 West, Centerville, or on tickets, click here.

And to watch a very brief video on the production, posted by the theater, click the player below. 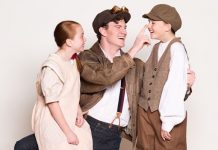 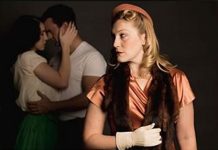 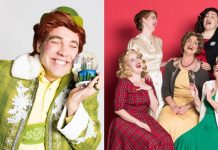