CHAMPAIGN, Ill., Aug. 24 (UPI) — Older adults who engage in regular physical activity have more active brains than those who are not active, according to a new study, which researchers said is an indicator of greater cognitive health.

Researchers used measures of brain health — the microscopic integrity of white-matter fibers which carry nerve impulses and interconnect the brain — to accurately measure whether or not a person is physically active.

“Our study, when viewed in the context of previous studies that have examined behavioral variability in cognitive tasks, suggests that more-fit older adults are more flexible, both cognitively and in terms of brain function, than their less-fit peers,” said Art Kramer, director of the Beckman Institute for Advanced Science and Technology, in a press release.

Researchers asked 100 healthy but not low-activity older adults between the age of 60 and 80 to wear accelerometers for 7 days, measuring their brain activity. Researchers found that the study participants who were more active had healthier brains, based on their white matter connections.

“We want to know how the brain relates to the body, and how physical health influences mental and brain health in aging,” said Agnieszka Burzynska, a researcher at the University of Illinois. “Here, instead of a structural measure, we are taking a functional measure of brain health. And we are finding that tracking changes in blood-oxygenation levels over time is useful for predicting cognitive functioning and physical health in aging.”

The study is published in PLOS ONE. 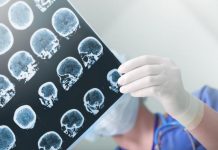 Too much brain activity may contribute to memory, attention impairments