MOUNTAIN GREEN, Utah, Aug. 17, 2020 (Gephardt Daily) — One person was killed in a head-on collision with a semi on Interstate 84 near Mountain Green late Sunday night.

“Several units responded and more calls came in,” the news release said.  “At 11:23 p.m., a caller indicated that there had been a collision. The wrong way vehicle, a Ford Crown Victoria sedan, had crashed head-on into a tractor trailer hauling onions.”

Lifesaving measures were given by troopers and medical personnel on scene, the news release said. The wrong-way driver was the only occupant of her vehicle. The driver of the wrong-way vehicle was pronounced dead upon arrival at the hospital.

The victim was not identified pending notification of family. 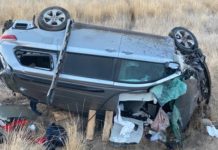