“The victim has been identified as Tai Lam,” said a tweet from Salt Lake City Police Department. “We are still attempting to identify the suspect and locate the vehicle.”

SLCPD Lt. Carlos Valencia told Gephardt Daily the incident happened at about 12:11 a.m. at 200 West and 400 South as the man was pushing a shopping cart across the street against the light. Lam was conscious and breathing when he was transported to the hospital. He was immediately taken into surgery, but died a short while later.

A follow-up tweet from SLCPD said the driver of the vehicle fled the scene after initial police contact.

Investigators would like to speak with the man in this photograph. He was driving a silver Chevy Suburban or GMC Yukon XL which may have cosmetic front-end damage. The license plate on the vehicle is a Utah ‘In God We Trust’ plate with an American flag. 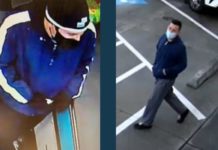