The incident began at about 10:20 p.m. when airport police stopped the car on Wright Brothers Drive at the International Center.

According to a statement from airport officials, a 16-year-old passenger got out and complied with police, while the driver, also 16, took off in the car.

Police contacted the car’s owner and determined the vehicle had been stolen.

The teen passenger was taken into custody and booked into Juvenile Detention.

“At about 4:30 a.m.,” the statement continues, “an airline mechanic found a juvenile in or around the wheel well of the aircraft while doing an inspection of the plane….”

The plane, a regional jet, was parked at a maintenance hangar ramp, northwest of the Airport terminals.

Airport police were notified and took the teen into custody for questioning. They learned that the teen was the same one who had fled in the stolen car.

After questioning, the youth was taken to Juvenile Detention, the statement says.

Gephardt Daily will update this story when more information is provided. 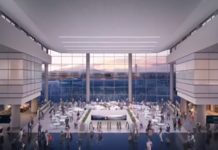