ELKO, Nevada, Nov. 17, 2021 (Gephardt Daily) — An Idaho girl who was the subject of an Amber Alert on Tuesday has been recovered safe in Elko, Nevada, and a suspect in the case has been arrested.

“Minor child has been located and is with law enforcement in Elko Co. Nevada. An arrest warrant has been served on the party believed to have kidnapped the minor child.”

The child, named Alaina, was believed taken from Burley, Idaho, by her grandmother, 41-year-old Elizabeth Rose Crofts, and was feared to be in “imminent danger.” The grandmother was supposed to take Alaina to school that morning, but did not.

“The child’s mother, Natalia Duey, went looking for her daughter and mother at a local motel only to find the mother had checked out,” the original Idaho State Police statement says. 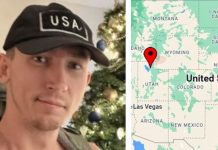