CENTERVILLE, Utah, May 20, 2022 (Gephardt Daily) — Fire crews were called to an apartment fire in Centerville on Friday afternoon.

The fire was quickly brought under control, according to a South Davis Metro Fire Service Area post on Facebook.

All occupants of the building were safely evacuated, SDMFSA stated. Several occupants had smoke inhalation, but no one needed to be transported to a hospital. 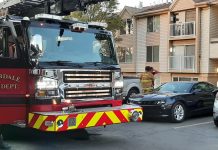