Eck was placed on administrative leave last month after an inquiry into the call, made sometime after the Falcon’s playoff game on Oct. 22.

The voicemail, which was posted to social media but later taken down, reportedly was from a call made by someone identifying himself as “Coach Eck.” It asked the student, a former football player, to meet with the boy’s parents because the mother was “talking s*** about the coaches here, and I’m going to put a stop to that, bro.”

It also reportedly said the caller felt it was “despicable” that the parents let their child quit the team.

Eck also taught physical education and “Fit for Life” at Clearfield High, joining the staff after coaching at Corner Canyon High, among other places.

“The Davis School District this afternoon terminated the employment of Mr. Don Eck as a teacher and coach at Clearfield High School.

“Mr. Eck was placed on administrative leave on Oct. 25, soon after allegations surfaced regarding his conduct. The district then investigated the situation and concluded that disciplinary action was needed.

“The district does not condone such behavior from any of its employees.” 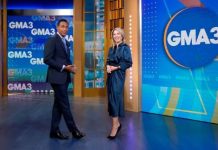 Amy Robach, T.J. Holmes out at ABC because of affair