A series of tweets from the Ogden Fire Department beginning at 6 a.m. said crews were on the scene of the blaze at 4821 Van Buren Ave.

“Interior division reporting heavy fire inside first floor,” a tweet said. “Unknown if there are occupants. Possibly a dog inside.”

Crews gained control of the fire and began a primary search inside the structure.

There was no one inside the house, officials said, and the dog was found in the backyard. A cat was located, uninjured, in the basement.

Officials have not said how much damage was caused by the blaze. 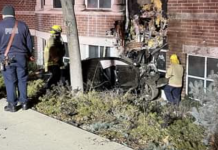