Type 3 helicopter continues dropping water on the #101fire to keep the fire from moving downhill. The fire is located in Blacksmith Fork Canyon on the Logan Ranger District. For firefighter safety due to extremely steep and rocky terrain indirect tactics are being used to suppress the fire. Smoke at times maybe visible from Cache Valley and the Blacksmith Fork area, please do not report, fire personnel are on scene.

The 101 Fire was first reported Friday at approximately 8:30 p.m. and was thought to be caused by lightning, said a Facebook post from Utah Fire Info.

The fire has burned approximately four acres of grass and juniper, the post said.

“For firefighter safety due to extremely steep rocky terrain and rolling rocks fire managers are using indirect tactics to suppress the fire,” the post said. “Resources on scene include two engines, one type 3 helicopter and approximately 15 fire personnel. The type 3 helicopter is dropping water to keep the fire from moving downhill.”

Smoke at times may be visible from Cache Valley and the Blacksmith Fork area, and residents do not need to report the incident, the post said. 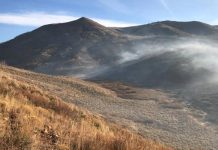