According to Draper City Police Sgt. Chad Carpenter, officers responded to a burglary Friday morning near 11500 S. State during which a cell phone and a computer were taken.

“Our officers then pinged the stolen phone and it led them to a shed,” Carpenter said. “Three individuals inside the shed did not initially come out, but after some time, one of the suspects surrendered followed shortly after by two others.”

Carpenter said a search warrant is currently being requested to search the shed for the stolen items.

Two males and a female were detained and are being held for questioning. The names of the individuals have not been released pending outcome of the investigation. 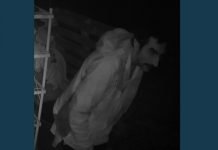