A Nissan Sentra was stopped at a stop sign on 1500 South facing east waiting to cross. A Dodge Durango was southbound on Main when the Nissan pulled in front of it, according to a Utah Highway Patrol press release on the 12:49 p.m. mishap.

“The Nissan failed to wait for traffic to clear and pulled in front of the Dodge causing the Dodge to collide with the Nissan in the driver’s door,” the UHP said. “The driver of the Nissan was killed on impact.”

Seatbelts were worn and used correctly by all occupants, the UHP said. 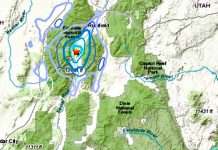