LAYTON, Utah, Nov. 11, 2020 (Gephardt Daily) — A dog has died as a result of a residential fire in Layton Wednesday afternoon.

Two juveniles were at home when fire started, the tweet said. Both attempted to locate and rescue a dog in the home. Firefighters later found the dog, which died as a result of smoke inhalation.

The juveniles were evaluated and released by EMS on scene; there were no other injuries as a result of the fire.

Investigators are on scene determining the cause and origin of the blaze.

Firefighters from Hill Air Force Base Fire Department assisted in fighting the fire. 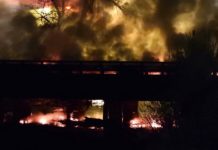