SALT LAKE CITY, Utah, May 20, 2020 (Gephardt Daily) — The bishop of a Kaysville ward of The Church of Jesus Christ of Latter-day Saints pleaded not guilty to possession of child pornography during an initial appearance in U.S. District Court in Salt Lake City Friday.

The charges, filed May 8, allege Timothy James Hallows, 62, of Kaysville, possessed material containing an image of child pornography involving a minor who had not attained 12 years of age, said a press release from the U.S. Attorney’s Office District of Utah.

Hallows was booked into jail in October 2019 on eight counts of sexual exploitation of a minor, a second-degree felony. Church officials confirmed at the time he had been released from his leadership position.

A change of plea hearing has been scheduled for June 30, at 3 p.m. before U.S. Magistrate Judge Dustin B. Pead. Hallows is in federal custody.

Prosecutors in the U.S. Attorney’s Office and the Davis County Attorney’s Office have
worked together to determine the best venue to prosecute the case, the press release said. Those discussions resulted in the filing of the Felony Information last week. This coordination happens regularly in child exploitation cases because of the significant penalties available in the federal system, the press release said. Law enforcement officers working these cases are often members of the FBI’s Child Exploitation Task Force, which allows them to work seamlessly with prosecutors in either venue.

“These cases, which involve the victimization and exploitation of children, are cases all
prosecutors feel strongly about,” U.S. Attorney John W. Huber said Wednesday. “We work with the Davis County Attorney’s Office regularly on child exploitation cases, along with other county attorneys throughout the state, to find the best venue to seek justice in these cases.”

Huber added: “County prosecutors and law enforcement officers are very experienced in investigating and prosecuting these cases, but they can be limited, candidly, by low state sentences. The tools we have in federal court can bring very significant, very appropriate sentences. In this case, it made sense to prosecute the defendant in federal court.”

Federal judges consider a number of factors when imposing a sentence for possession of
child pornography, the press release said. They include the number of images, use of a computer, distribution of the images, the defendant’s abuse of a position of trust to conceal the offense, the ages of the children in the images, the defendant’s criminal history, the nature and circumstances of the offense, and the characteristics of the defendant.

Multiple counts do not change the sentence because the court is aware of each image possessed by the defendant regardless of how many counts are charged.

As a part of sentencing in a case, prosecutors will ask the judge to impose a term of
supervised release for the defendant following the completion of their sentence. In child
exploitation cases, it can be up to life with a minimum of five years. There is no parole in
federal court cases. A defendant charged in a felony complaint is presumed innocent unless or until proven guilty in court.

A probable cause statement filed by an officer of the Davis County Sheriff’s office said that on Aug. 6 of this year, Skype officials filed a complaint with the National Center for Missing and Exploited Children regarding a user who uploaded and publicly shared child sexual exploitation materials.

The user’s screen name was given as “timhallows.” Davis County investigators viewed the materials and found the files constitute child sexual exploitation material, the statement said, including videos and photos showing nude or partially clothed prepubescent girls, some of whom posed with nude adult males. At least one child was shown engaged in a sex act.

The information and materials led investigators to Hallow’s Kaysville residence. State, local and federal investigators with the Internet Crimes against Children Task force and the FBI Child Exploitation Task Force then executed a warrant.

“Hallows was waived his Miranda rights and agreed to speak with investigators,” the probable cause statement said. “He admitted to distributing child sexual abuse material during online communications while using Skype.

Investigators at Hallows’ residence “located thousands of images of pornography,” the probable cause statement said.

“Hallows stated the children are not real, and provided several incidents of justification and rationalization for the conduct,” it said. “Hallows refused to take a polygraph examination with questions regarding hands on sexual contact with young children. He further stated that he has done nothing regarding sexual contact with children long term. He described camping trips with children, where he took pictures of children, expressing that this could lead to a failed polygraph.”

The statement said Hallows “did these camping trips while acting his role as a bishop for the LDS church. Hallows was told investigators believe that he has had sexual contact with children, he stated ‘Uh huh,’ and shook his head in affirmation.”

“Hallows hold a special position of trust in the community as a bishop in Kaysville,” the probable cause statement said. “This includes unfettered access to children in his congregation and in private.”

The probable cause statement said investigators believe Hallows has committed similar crimes in other states, including Arizona.

The LDS Church spokesman Eric Hawkins released a statement to Gephardt Daily at the time. It read: “The allegations against this individual are serious and deeply troubling. The Church of Jesus Christ of Latter-day Saints has no tolerance for abuse of any kind, including child pornography, and teaches its members and leaders that such behavior is offensive to God and to His Church. 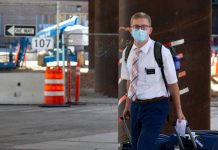