Jamison Sudweeks Smith, 47, of West Jordan, has been charged on suspicion of:

One victim told police that Smith “coerced her into the sexual activity during her teenage years by telling her she could not tell anyone. He told her if people found out they would get in trouble,” Smith’s probable cause statement says.

One victim said she never told anyone about the abuse at the time because she “felt ashamed of what Jamison had done to her,” the statement says.

West Jordan police interviewed the first of the victims in July of 2021, booked Smith into the Salt Lake County jail in March of this year. He is being held without bail. 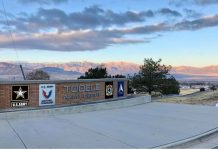