OGDEN, Utah, Oct. 15, 2016 (Gephardt Daily) — A head-on collision in Ogden Canyon sent three people to the hospital Saturday night and closed the canyon for about an hour.

The crash, which occurred at about 7:50 p.m., involved a full-size truck and a 4-door sedan, said Ogden Police Sgt. Nealy Adams.

Following the collision, the sedan caught fire, Adams said, but deputies and firefighters quickly secured the scene and put out the flames. No one was injured by the fire.

Five people, in their late teens and early 20s, had been in the sedan, Adams said. Three of the individuals in the car were injured in the crash and were taken by ambulance to a local hospital. Adams said their injuries were listed as severe to critical, but were not life-threatening.

The other two people in the car had only minor injuries and left the scene when they were picked up by friends or family members.

The truck was occupied by a man and a minor child. The man called 911 to report the accident. He and the child were also picked up and left in personal vehicles.

Sgt. Adams said Ogden Canyon was closed in both directions so the ambulance and tow-truck could come up the narrow road without encountering any traffic. Both the truck and the car had to be towed from the scene.

Adams said it appeared that the crash occurred when the sedan crossed the line into the oncoming lane. 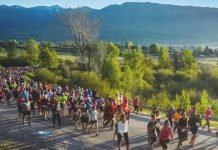 Ogden Marathon to return in May 2022