SUMMIT COUNTY, Utah, Oct. 8, 2020 (Gephardt Daily) — Human remains found by a hunter in Summit County have been identified as those of a missing West Virginia man, officials said Thursday.

“On Oct. 5, just after 9:30 a.m., the Summit County Sheriff’s Office received a phone call from a hunter who said he found human bones, clothing, a survival pack, and a hunting rifle in the Lyman Lake area of the Uinta-Wasatch-Cache National Forest in eastern Summit County,” said a news release from the sheriff’s office.

“For the next two days, investigators and members of the Summit County Search and Rescue team responded to the area to recover the human remains and other items.”

The human remains were turned over to the Utah Office of the Medical Examiner to determine identification. On Thursday afternoon, the remains were determined to to be those of missing person Carl Crumrine. Officials have not yet given a cause of death for Crumrine.

“Our sincere condolences are with the Crumrine family and friends as they mourn the loss of Carl,” the news release said. “We appreciate the many personnel, agencies and resources that worked diligently over the past year to find Carl and bring closure to his family.”

Suspect in custody after high-speed pursuit in Summit County 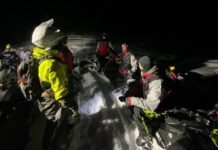