BRIAN HEAD, Utah, July 9, 2019 (Gephardt Daily) — Two juveniles have been apprehended after running away from a treatment facility in the remote mountains of Southern Utah near Brian Head and allegedly burglarizing numerous homes.

On July 7 at approximately 6 p.m., the pair went missing from the Monuments Treatment
Facility on Dry Lakes Road, according to a news release from Brian Head Public Safety.

Iron County Sheriff’s Office along with Brian Head Marshal’s Office, a K9 Unit from the
Division of Wildlife Resources and Iron County Search and Rescue along with three
of their scent dogs responded, the press release said.

The search was called off at about 1:30 a.m. on July 8 when dogs became fatigued and tracks were difficult to see in the grass and brush.

“At approximately 12 p.m. July 8, a homeowner in Brian Head returned home to find
items missing from her home,” the press release said. “She immediately contacted the Brian Head Marshal’s Office and a search of the area found multiple homes burglarized.”

Evidence was collected that suggested the two missing juveniles had been involved.

At that time Iron County Sheriff’s Deputies along with Iron County Search and Rescue and
the Division of Wildlife Resources, with K9 Carlo, were called back to assist with the search.

“A quick search of the area was conducted with no results,” the press release said. “SUU Aviation was then called to assist with a helicopter.”

At around 5 p.m., authorities received a tip that two male juveniles were in Parowan
Canyon on SR-143. Units quickly responded to the area.

“K9 Carlo and his handler quickly picked up a scent that lead to the two juveniles who were hiding in the brush along the highway,” the news release said. “The pair turned themselves in to a Sheriff’s Deputy who was patrolling the area.”

Brian Head Marshal’s Office is now handling the investigation and have the two juveniles
in custody pending charges.

Their identities have not been released because of their juvenile status. 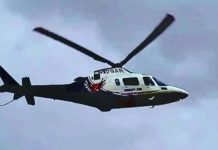 Boy, 6, airlifted to hospital after 20-foot fall from ski lift at Brian Head 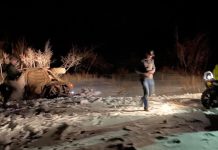 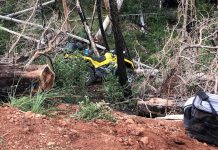