Provo City officers were dispatched to a suspicious male outside the apartment complex in Center Street on Saturday, the statement said.

“The male was seen acting weird with constant jerky movements,” the statement said. “The caller/victim informed dispatch that the male was standing outside the victim’s apartment when she returned home. The victim asked the male if he was all right and the male, identified as Daniel Adam Smith, began walking toward the victim and a juvenile male.”

Smith then began to pull a knife out of his pants and hold it above his head, the statement said.

The victim yelled for the juvenile, her son, to get into the house. Smith proceeded to follow the victim and the juvenile, advancing while holding up the knife in an aggressive manner “which one would think he was going to slice or attack,” the statement said.

When the victim and child got into the apartment, the victim called 911.

“The victim continued watching Daniel as he went down to a basement apartment with the knife,” the statement went on.

When officers arrived they found Smith running up the stairs from the basement apartment at the back of the complex. He was asked if he lived at the complex and denied living there. He also did not know anyone at the complex, he said. Smith did not have the knife, and denied to officers that he had a weapon.

Officers were escorted down the stairs by the tenant above the basement apartment, and located the knife behind numerous boxes.

Smith was shown the knife, and stated it was his and that he lied to officers, the statement said.

The suspect is currently on probation with Adult Probation and Parole and is a restricted individual.

Smith is being held without bail at Utah County Jail. 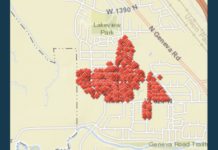