SOUTH SALT LAKE CITY, Utah, July 1, 2018 (Gephardt Daily) — A suspect has been arrested after a drive-by shooting of his ex-girlfriend’s home in South Salt Lake on Saturday night.

The driver of the suspect vehicle was Rory Curtis Cordova, 50, of Ogden, according to a news release from South Salt Lake public information officer Gary Keller.

“When police arrived, they discovered that the house at this location had been hit by at least eight bullets,” the news release says.

At the time of the shooting the house was occupied by a 58-year-old female resident and her 45-year-old nephew. No one in the residence was hit by the gunfire, officials say..

“At least eight shots were fired into the house in the immediate direction of both victims and another went through the back vinyl fence,” a probable cause statement says. “There were bullet holes through several windows, walls and doors. A large TV was also damaged.”

Police determined that the gunfire came from a gray SUV vehicle that was caught on the home’s surveillance video, the news release goes on. The suspect vehicle closely matched the same vehicle belonging to female victim’s ex-boyfriend.

An attempt-to-locate was issued to all surrounding agencies. At approximately 4 a.m. Sunday, South Ogden Police stopped a vehicle that matched the description of the suspect vehicle. When police approached the vehicle they noticed several bullet casings similar to the bullet casings at the scene in South Salt Lake.

“Several 9 mm shell casings that were the same as the shell casing at the shooting scene were in plain view in the vehicle,” the probable cause statement says. “A Glock 26 9 mm handgun was in the center console that was listed as a stolen firearm.”

Cordova was arrested and taken into custody without incident in connection to the drive-by shooting.

The suspect has not yet been formally charged. The case will be screened by the Salt Lake County District Attorney’s Office. 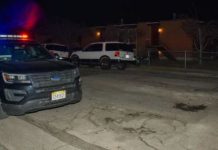