Officers were dispatched to the house, on the 1100 block of Southwell, at about 6:30 p.m., and detectives and CSI were still on scene in the early hours of Sunday morning.

Police were called when the male victim was seen “covered in blood” as he got into a car, apparently to go to the hospital, Ogden Police Lt. Tyler Ziegler told Gephardt Daily.

Police and emergency medical crews located the victim and transported him to the hospital, where he immediately underwent surgery for a stab wound to the chest.

At 2 a.m. Sunday, Ziegler said the victim was in stable condition, but was still in recovery and unable to speak with the police.

When officers first arrived at the scene, a man remained in the house and refused to come out. It took a heavy police presence on the street, repeated orders on a loudspeaker, and a warrant served by SWAT officers to finally convince the man to come out.

Ziegler said officers obtained enough information to identify the man as a “person of interest,” and officials have been attempting to interview him.

“No one is being very cooperative,” Ziegler said.

A woman was detained, in handcuffs, on a street corner south of the house, where she could be heard complaining loudly to the officer who was stationed there. Ziegler declined to identify the woman or her possible involvement and only said that she is not now in custody.

“The investigation is still going on,” Ziegler said. “The detectives and CSI are still gathering information, and we’re trying to be as thorough as possible.”

Jilted on loan request at Ogden credit union, robber takes it out in cash 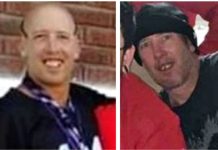