LAYTON, Utah, April 9, 2019 (Gephardt Daily) — A 67-year-old man was transported to an area hospital early Tuesday morning after a fire broke out in the bedroom of his apartment at Quail Cove Apartments in Layton.

Battalion Chief Jason Cook, Layton Fire Department, told Gephardt Daily that a neighbor in another apartment awoke to the smell of smoke. When the neighbor realized the fire wasn’t in his unit, he went out and saw smoke coming from the adjacent apartment and called 911.

Cook said the call was received at 1:17 a.m. and Layton firefighters, assisted by Hill Air Force Base crews, arrived to find a “very small fire” in the bedroom of the apartment at 240 W. Antelope Drive.

The man who lives there, however, had collapsed from smoke inhalation and was transported to McKay-Dee Hospital in serious, but stable condition.

Cook said the fire was confined to the bedroom, but there was smoke damage throughout the apartment. He estimated the dollar amount of damage to be $15,000.

No one else from the 12-unit building was displaced, and firefighters were already leaving the scene within about an hour of arrival.

Cook said the cause of the fire is not known, and is currently under investigation. 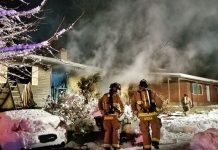 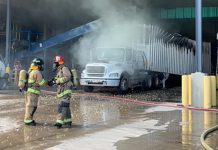