The Weber County Sheriff’s Office also responded to the scene.

The fire, which was called in at about midnight, was in a garage in the area of 5100 South, WFD Battalion Chief Mark Lund told Gephardt Daily.

Lund said the garage was fully engulfed when firefighters arrived. They had the blaze under control within about 20 minutes, but the structure and its contents were a complete loss.

Fire crews remained on scene through the night to ensure there were no hot spots or sparks that could ignite the home on the property.

The cause of the fire is as yet unknown and is under investigation by the Weber Fire District Fire Marshal. 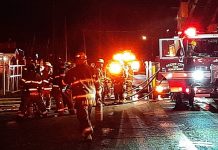