Utah Highway Patrol Sgt. Cameron Roden told Gephardt Daily a driver was traveling eastbound on SR-201 at approximately 11 p.m. and ended up losing control. The driver reportedly hit the barrier on both sides and ended up blocking the middle of the freeway on SR-201 and 4000 West.

“Multiple cars stopped to render assistance and aid, and another car came in and hit two of the stopped vehicles,” Roden said.

Two or three people were transported to area hospitals by ground ambulance with non-life-threatening injuries, he said.

The driver of the vehicle that hit the barrier and blocked the middle of the freeway was arrested for DUI. That driver has not been identified. 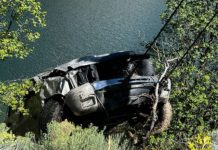