SALT LAKE COUNTY, Utah, Sept. 20, 2020 (Gephardt Daily) — A Murray man has been charged with animal cruelty after he allegedly threw his dog to the ground then punched it repeatedly.

A probable cause statement from the 3rd District Court of Salt Lake County says Devin Jordan Spoelstra, 25, is facing a charge of aggravated cruelty to an animal, a third-degree felony.

“The subject used physical violence against his dog which included throwing the dog to the ground after which he climbed on top of the dog and repeatedly punched the dog in the head and the side,” the statement said.

Spoelstra was taken into custody and after being read his Miranda rights, additionally stated that the actions against the dog continued after he returned to his apartment, which surveillance footage did not capture.

Salt Lake County Animal Control took custody of the dog; they advised that blood was found in the pet’s urine.

Spoelstra was transported to Salt Lake County Jail with his bail set at $50,000. 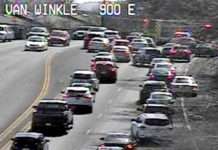