WEST JORDAN, Utah, July 24, 2022 (Gephardt Daily) — One juvenile suspect has been arrested and more arrests are expected after a shooting that killed two juveniles and an 18-year-old man in West Jordan Saturday night.

The homicides happened outside a house party in the area of 3300 W. 6920 South, West Jordan Deputy Police Chief Jeremy Robertson told Gephardt Daily. Police arrived after being summoned at about 10:46 p.m. Saturday.

“Upon arrival, officers discovered three individuals had been shot,” says a statement released by the West Jordan Police Department.

“One victim was pronounced dead on scene, and two others were transported to the hospital where they succumbed to their injuries.”

One adult and juvenile have documented gang ties, the statement says. The other juvenile victim has not yet been identified.

The West Jordan police statement identified all as black males, but did not indicate if race was a factor in the altercation.

Robertson said, “Some kind of altercation occurred, possibly with people who were attending showed up at some point. Multiple shots fired, obviously lots of shell casings in the area, reports of vehicles leaving the area. It looks like there’s a possibility it could be gang-related.”

Victims’ names are being withheld at present.

“Investigators worked through the night and were able to identify a juvenile suspect,” the WJPD statement says. “The suspect has been taken into custody and items of evidence including a firearm were recovered.

“Investigators continue to process the scene and follow up on investigative leads. Additional arrests are anticipated.”

The police statement thanked the State Crime Lab and the Metro Gang Unit “for the assistance they have provided and continue to provide in this investigation.”

The WJPD statement says additional details are being withheld to protect the integrity of the investigation, and more information will be released as appropriate.

“We believe that this act of violence was a planned, targeted act and that there is not currently a risk to the general public,” the statement says.

“We extend our condolences to the families of the deceased and will continue to work to identify and arrest those responsible.” 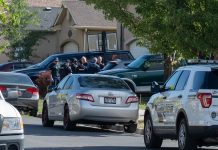