PROVO, UT – August 26, 2015 (Gephardt Daily) – Waking up to the smell of pigs and the snorting sounds of swine would be expected if you lived on a farm, but these porky pot bellies are living the lap of luxury smack in the middle of a Provo neighborhood. Their presence is creating a mass of contention between the farm owner and his neighbors.

Shelley Beagley, one of the neighbors, has taken photos and posted videos showing the fancy footwork of the not-so-adorable swarm of pigs, as they escape their fencing and tear up flower beds and exquisite landscaping.

On August 23, just three days ago, Beagley posted a photo on her Facebook with the caption “So here we are on Sunday morning. Pigs out, again. Well over 30 this time. In my flower bed.”

Farm owner Matt Baker came to the neighborhood in 2014, and homeowners have grown tired of his apparent inability to keep the pigs on his property.

According to Provo Police Lt. Brandon Post, Baker already has 14 pending charges in the Provo City Justice Court for failing to keep his livestock contained and was issued 80 additional citations this past Friday, Saturday and Sunday. Baker has told authorities he will fight all the charges. 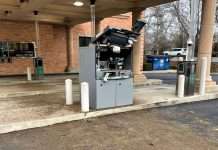