ROOSEVELT, Utah, Sept. 26, 2021 (Gephardt Daily) — A 28-year-old man has been booked into the Duchesne County Jail after a Roosevelt Police officer says he was firing a gun in a pubic place while under the influence of drugs.

After the Thursday incident, Tyler Butts faces charges of:

A probable cause statement filed by an officer of the Roosevelt Police Department says a call reporting shots fired came to dispatch at 11:30 p.m. Thursday. The officer responded to the area of 400 East and 200 North, and found a man in dark clothing walking around the area.

“The male had an assault rifle and had discharged at least three rounds,” the statement says. “According to witnesses, the rounds were fired in the area, but the male yelled about shooting people… He was last seen around Top Stop on the corner of 400 E. 200 North.”

The armed man was found standing in the doorway of the Top Stop convenience store. The officer approached with his gun drawn.

“The rifle was slung on the male’s back. I instructed the male to not touch the rifle, to keep his hands up, and kneel. The male sat flat on the cement and kept his hands up. I retrieved the rifle from his back. I then had the male stand up and I placed him under arrest for firing a firearm within city limits.”

The suspect, identified as Butts, “was shaking and spoke erratically. Tyler spoke so fast he didn’t make sense. I also observed he was sweating profusely and had dilated pupils. Even when light was shown in his eyes his eyes didn’t react or shrink, they stayed large.”

Butts also spoke to people who were not present, the statement said, adding that Butts is a known drug user.

The officer arrested Butts and checked the rifle.

“It was loaded with the safety off and a round in the chamber, ready to fire,” the probable cause statement says. ” I took the gun and later booked it into evidence. The gun had 25 rounds in the magazine with the one in the CE chamber. Based on witness testimony and the magazine capacity, it’s believed Tyler discharged the gun four to six times.”

Butts was transported to an area hospital, where a doctor’s evaluation concluded he was under the influence of drugs. Once medically cleared, Butts was booked without bail into the Duchesne County Jail. 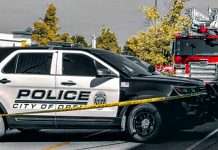