WEST JORDAN, Utah, July 20, 2019 (Gephardt Daily) — Firefighters were dispatched Friday night to a report of smoke at a duplex on Redwood Road.

Capt. Mike Powell, West Jordan Fire Department, said when crews arrived near the 9300 block of Redwood, there was visible smoke and they determined that the fire was in the  the building’s attic.

“It’s a common attic,” he said. “Both units share the same structure, so there was some  damage to both.”

Powell said the fire was under control within 15 minutes, and everyone was already out of the building when crews arrived. There were no injuries.

The exact cause of the fire had not yet been determined, but Powell said it originated in the attic itself.

“With the new technology, cameras, we were able to pinpoint it really quick and isolate the fire.”

An estimate for the amount of damage caused by the fire wasn’t available, but Powell said there was enough damage to both units that the occupants would be displaced overnight. 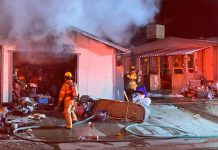 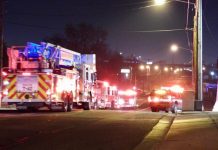 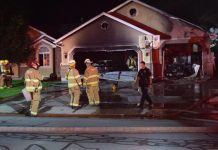 Fire, smoke cause $125k in damage to W. Jordan garage and home