A probable cause statement from the 1st District Court of Rich County said John Joseph Sharkey, 43, is facing charges of:

The arresting officer was contacted by dispatch on a report of a naked woman coming into the WorldMark resort office in Garden City, asking to use the phone and reporting that the suspect, who is known to her, had assaulted her and locked her out of a house in 12 degree weather, the statement said.

Two officers spoke with the victim. According to the probable cause statement the alleged victim described being held captive by Sharkey for two hours or more; she said he held her at knifepoint and threatened to kill her, and also pointed what was later discovered to be a pellet gun at her and threatened to shoot her.

He also allegedly assaulted her with his fists, causing bleeding from her nose and various marks on her face, strangled her unconscious, and took her phone taken away from her when she tried to contact 911. He also videotaped her, the statement said.

Officers went to the suspect’s residence and found him in a small basement hallway next to his bedroom and the doorway leading to the garage, hiding behind a coat rack, the statement said.

“Sharkey’s appearance startled me, he is a very large man, 6 feet 5 inches in height and 250-plus in weight,” the arresting officer wrote. “He immediately demanded to know where my warrant was, I ordered him to turn around and put his hands upon his head and he again demanded a warrant. I ordered him to place his hands upon his head again and he turned and ran into the garage through the doorway.”

Two officers took Sharkey to the ground in the driveway and placed him in handcuffs, according to the probable cause statement.

“After a few minutes he seemed to calm down and I turned to escort him to my patrol vehicle when he jerked away from me out of my grasp and fled back towards the house,” the arresting officer wrote. “He (Sharkey) attempted to shut the garage door but I was able to block him from doing so and force my way into the garage with him where I again took him to the ground and held him immobile.”

Two other officers then put leg shackles on the suspect, police said.

“We escorted him to my patrol vehicle where we attempted to put him into the cage and he continually resisted going into the cage,” the statement said. “We had to use a drive stun and eventually had to put a tether leash around his leg shackles and pull him into the cage where we were able to secure him.”

At mile marker 124 in Logan Canyon the suspect begin to repeatedly bang his head against the walls of the cage and the camera of the cage, and the officer to stopped the vehicle and used a drive stun to get the suspect to stop, according to the probable cause statement.

When Sharkey was removed from the cage, he allegedly dropped three Adderall pills and a further search of his clothes found one more pill, according to police.

He was transported to jail, where he is being held without bail. 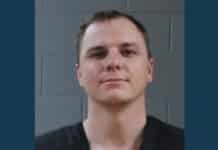