SOUTH SALT LAKE, UTAH – August 15, 2015 (Gephardt Daily) – South Salt Lake Police have been able to identify the suspect who attempted to carjack a woman with a semi automatic that jammed when they pulled the trigger.

According to Sgt. Keller, Cesar Mariano Lobos, 18, putlled a gun on a woman as she was talking on the phone with her boyfriend walking towards another friend’s apartment in the Mountain Shadows complex at 3825 South 700 West.

The woman’s boyfriend, who was already at the complex, came to her aid and confronted Lobos and another man who was with him, before the men fled on foot. “They ran across the street to the next complex but our dogs lost their scent somewhere in the area. We are uncertain if they got in a car but that maybe reason why our dogs suddenly lost their scent,” said Keller.

A few hours later West Valley Police arrested Lobos after a chase in a stolen vehicle.

They were able to connect Lobos to the first crime due to similarities between the two cases.
Cesar Mariano Lobos admitted  to pointing a gun at the female and racking the slide of the gun while demanding the cell phone and keys to the car.
Cesar Mariano Lobos remains in the Salt Lake County Jail with additional charges of aggravated assault a second degree felony and aggravated robbery a first degree felony. 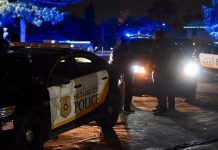