LEHI/DRAPER, Utah, June 28, 2020 (Gephardt Daily) — Evacuation orders put in place because of the Traverse Fire have been lifted for residents of the Maple Hollow neighborhood in Draper and Autumn Hills and Spring Dew Lane neighborhoods in Lehi, city officials said Sunday evening.

“Crews have assessed the situation and are confident that no additional flare ups will occur in the area. We will continue to monitor the situation closely and keep you informed as additional updates becomes available,” Draper City said in a news release.

“Good news — Evacuation orders have been lifted for residents living in the Maple Hollow neighborhood. Residents are now allowed to return to their homes. Thank you @drapercityfire, @FireAuthority and @UtahFFSL for all their hard work keeping us safe!”

“The Traverse Fire is 26% contained. Fire activity has not picked back up despite strong winds in the area. Fire managers are feeling positive about the fire, many resources from the incident have been diverted to support the other fires.”

At 10 a.m. Sunday, the fire was estimated at 500 acres, according to a tweet by Utah Fire Info. No structures had been lost, and about 200 resources were assigned to the fire, with more on the way.

“Forward progression of the fire has been significantly slowed. Winds are favorable. Air and ground resources are actively engaged in suppression,” the tweet said.

Officials determined that the fire was sparked by fireworks. 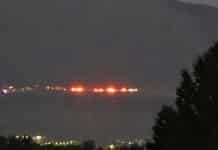 Man transported to hospital after hang glider crash in Draper 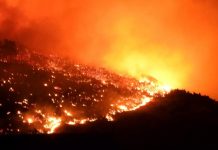