In an Instagram post shared Sunday afternoon, hunt organizers John Maxim and David Cline revealed the latest winners of the game are Korri and Sashley Wolfe, a single mother and her sister. They are Utah residents and veterans who served in Afghanistan.

The two won the $20,000 prize after following cryptic clues that led them to various locations, including the final spot. The box found contained some of the cash, and instructions on how to reach organizers to collect the balance.

This hunt lasted 39 days, and more than 25,000 people participated, according to information from the Utah Treasure Hunt.

Information on the site says the hunt is a marathon, adding “You will need to solve multiple clues at multiple locations throughout the Wasatch Front. You can form teams geographically, but at some point you will need to figure out how to split up the treasure. Good luck and stay safe!”

The site’s clock is stopped to indicate no current hunt.

The previous hunt ended about a week after the first clues were released, on June 3 of this year. This is the third year Maxim and Cline have organized the summer hunt.

Pleasant Grove Police: Man jailed after found in bloody garage with critically injured victim, admitted he ‘was going to kill her’ 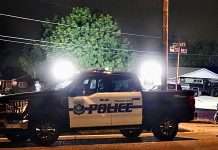