UINTAH COUNTY, Utah, Dec. 15, 2020 (Gephardt Daily) — The mother of a toddler boy has been booked into jail for investigation of aggravated murder and child abuse following a shooting incident that occurred Monday.

Sheriff’s deputies responded Monday on an initial report that a woman and boy had been shot in the area of Fantasy Canyon in central Uintah County.

Peck and her son, Zack, were found in a vehicle just west of state Road 45 on Glen Bench Road, the news release states.

The child was deceased when deputies arrived. Peck was injured and was transported to a local hospital for treatment.

“During the investigation, deputies learned that Peck had taken her son on a drive to the Dry Fork Canyon area earlier in the day,” the news release said. “She then stopped at a camping area north of Dry Fork on Red Cloud Loop Road.

“After spending some time in the area, Peck put her son back in the vehicle and shot him with a .22-caliber rifle. Peck then shot herself.”

The news release says that, after shooting herself, Peck drove around Uintah County for several hours with her son in the vehicle, eventually ending up on Glen Bench Road, where the deputies made contact with her.

After being released from the hospital Tuesday, Peck was taken into custody and transported to jail.

“The sheriff’s office extends its most sincere condolences to all who knew and loved Zack,” the news release said. 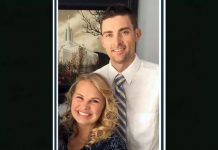