HELPER, Utah, March 3, 2021 (Gephardt Daily) — Two juveniles have been arrested after vandalism and burglaries in Helper this past weekend.

A Facebook post from Helper City Police Department Wednesday morning said: “On Feb. 28, unknown suspects forcefully entered the Helper City auditorium/library by way of breaking out multiple large windows. After gaining entry to the building the suspects proceeded to vandalize the entire premises, and at one point attempted to set fire to the interior of the building, all of which resulted in several thousands of dollars damage.”

Other similar acts were reported in the same area by local businesses, which are suspected to be related to the auditorium incident.

On March 2, after further investigation of evidence found at the scene, along with evidence gathered from prior similar crimes, as well as information from citizens of the community, Helper City Chief of Police Chris Gigliotti, was able to identify, locate and interview two male juveniles allegedly involved in all the mentioned crimes.

“The interviews resulted in determining the two juveniles as the responsible persons for all the above crimes as well as other crimes, which were uncovered during the interviews,” the news release said. “Criminal charges will be referred to the 7th District Juvenile Court, along with the request for restitution for the damages incurred during this incident.” 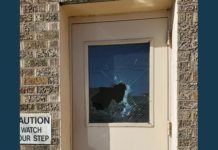 Police searching for suspects after vandalism, burglaries in Helper