SALT LAKE CITY, Utah, March 12, 2021 (Gephardt Daily) — More details have been released after a suspect fled from police in Taylorsville and crashed his car after an alleged domestic violence incident.

A probable cause statement from the 3rd District Court of Salt Lake City said Gage Lint, 29, is facing charges of:

Officers responded to a domestic incident on Thursday night in the area of at 890 W. Storm Mountain Drive in Taylorsville.

“As officers were en route to the address, a second caller advised dispatch that a man had a gun and was threatening a female with it,” the statement said. “As officers arrived and were attempting to develop a contact team, a male later identified as the accused person (A/P) was observed leaving the residence. Officers attempted to contact the male, but he entered a vehicle and fled.”

Officers attempted to initiate a traffic stop on the suspect and had their emergency equipment activated, but the he continued to flee, the statement said. Spikes were set up and the suspect’s vehicle was disabled in Millcreek; he then crashed his car.

He then exited his vehicle and continued to flee on foot as several officers gave commands for him to stop. Lint was Tased for failing to stop and subsequently taken into custody.

“The initial officer on the pursuit advised the A/P had thrown a firearm from the vehicle, which was recovered as evidence,” the statement said. “It was later determined the A/P is a category I restricted person who is not allowed to be in possession of a firearm.”

Officers on scene of the domestic incident contacted the victims at the residence where they discovered Lint had arrived earlier in the day, and had begun to argue with a family member. She told officers that Lint had choked her and punched her in the face causing injury to her lip and teeth.

Another family member tried to de-escalate the situation, the statement said. The suspect then forced that family member into a back bedroom where he pushed her several times. The suspect also grabbed his waistband and said, “I will use this on you.” That family member believed that Lint may have had a firearm, as she has allegedly seen Lint with a firearm numerous times.

During the investigation, it was determined there were four children inside the home
at the time of the aggravated assault. 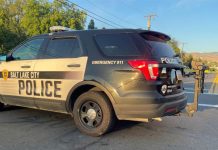