WAYNE COUNTY, Utah, May 30, 2019 (Gepharpt Daily) — Officials have identified a husband and wife who died in plane crash that occurred late Friday morning in the Grover area of Wayne County.

The pilot of the Cirrus SR22 was identified as Christian C. Simonsen, and the passenger was identified as his wife, Lynn Ann Anderson-Simonsen of Morgan Hill, California, said a news release from the Wayne County Sheriff’s Office.

A previous news release said Wayne County Sheriff’s officials were dispatched to Miner’s Mountain Road in the Grover area on a report of a single-engine plane crash at about 11:22 a.m.

The sheriff’s office requested Wayne County EMS to respond and had WCSO Search and Rescue on standby, according to the news release issued by WCSO Friday afternoon.

Two occupants of the aircraft were found deceased at the site, the sheriff’s office said; they were the only people aboard.

The cause of the crash is under investigation by the Federal Aviation Administration and the National Transportation Safety Board as well as an investigator from the aircraft manufacturer. 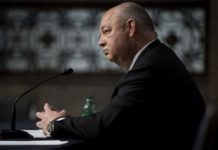