KEARNS, Utah, May 29, 2022 (Gephardt Daily) — Police have released the name of the 20-year-old Kearns man stabbed to death early Sunday.

Rustyn Christopher Opperman died after police found him unconscious with multiple stab wounds outside a home near 4500 West and 4900 South, the Unified Police Department announced in a Facebook post.

“Our condolences to his family and friends,” the post states.

Police also announced the arrest of a father and son in connection with Opperman’s death. Benny Thomas Martinez, 44, and Anthony Landh Martinez, 20, both were arrested for investigation of murder and are being held without bail in the Salt Lake County Jail.

Police say Opperman lived next door to Benny Martinez and went to his home to recover a possibly stolen cellphone. Witnesses told police that Benny Martinez was then seen assaulting Opperman, standing over the man and punching him, according to a probable cause statement filed in Salt Lake City’s 3rd District Court.

Meanwhile, Anthony Martinez “went into the house and grabbed a knife,” court documents state. When he rejoined his father, Anthony Martinez began stabbing Opperman in the back “while he was on the ground being actively assaulted by (Benny Martinez),” according to the police statement.

Medical personnel attempted to revive Opperman, but he died at the scene, police said. 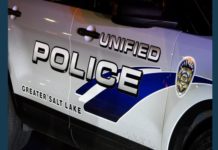